The 4 gigs in October are approaching, and I’ve now confirmed all the support acts, how exciting! I wanted to play with people that I’ve never played with before. This is a blog just to talk about them a little bit and to try and convince you to come and see me. I’m so excited to get out and play again. Even more so for Manchester and London where I play with a band. The band are sounding great as well. But anyways, where was I? O yeah, supports…..

The first night of this tour is the return to my hometown of Wrexham. The venue is an arts space, which used to be JJB sport. I played there a few years for ‘Focus Wales’, a lovely festival based in Wrexham that you should check out. First on this night will be my mate Jamie Jay. I’ve known Jamie for many years now. We were on the same pub circuit when we both lived in North Wales. I remember playing around Llangollen, and people saying ‘You should check Jamie Thomas, his voice is incredible’. I then met him, at one of my gigs I think. He moved to London for a bit and we were both residents at Proud in Camden. He’s a great lad and his voice is something you have to hear.

Second up will Joseph McCorriston. It’s really strange that I’ve never actually met this guy. He’s toured with Dave Giles a bit, but for whatever reason, I wasn’t able to make that tour. When Dave returned from his tour with Joe, he said ‘You’d love Joe, you’d get on so well, he likes McFly’. That’s enough for me to get on board with someone. Joe released his album ‘The Party We Came For’ last year and it’s great. He tours pretty much constantly and I love that about him. Don’t be surprised if we end up doing a McFly cover on the night, I’m already planning it.

The second night of the tour will take place precisely 7 days later in a new venue for me. It’s called AATMA, and it’s in the Northern Quarter, around the corner from The Castle and Gullivers. This night is also the first time anyone will see me play with the brand new band. First up this night, will be local boy(ish) ‘Arms and Hearts’. I was sitting at my computer one day replying to emails and doing what can only be described as ‘Painfully boring admin’, and I put a tweet out asking about new music to listen to. My friend Steve (I like to think we’re friends, I’ve met his missus, that makes us friends right?) replied with a link to Arms and Hearts. It took me approximately 10 seconds to fall in love with it. He sounds like Gaslight Anthem crossed with Tom Joad era Springsteen. What’s not to love?

Second on the night will be Scribble Victory. When I played Bodega in Nottingham a couple of years ago, these guys were opening up. I completely fell in love with their stage craft. It was just the two of them on stage harmonising like their lives depended on it. The drum set up is a beauty to behold as well. If you’ve ever seen MckNasty, the drummer reminds of him a little. It’s so good. Think Dashboard Confessional crossed with Modern Baseball. So excited to have these guys on the bill.

The third night of this tour is my biggest headline show ever, in that it’s the biggest venue that my name has been on top of the bill. It’s at Camden Assembly, previously the Barfly. I played my first ever London gig in Camden Barfly in 2010, and 7 years later, BAM, I’m headlining. You can’t deny that progress *insert sarcastic emoji here*. Opening the night will be London based duo ‘Croft and Cotes’. I got an email a few months off these asking to support. When I opened the music link they sent, I loved it. It was for their latest single ‘Why I’m Here’, it’s folky pop little number. I love it. Can’t wait to see what these guys bring to the table live.

Second on the night will be my good friend Tom Dibb. I met Tom a few years when I moved to London as he was a resident tea drinker and shower taker at the house I moved into. A few years ago, Tom decided that the conventional way of living was not for him and decided to live in his VW Camper Van. He’s a regular on the VW festival circuit around the UK. O yeah, one minor little thing he did as well…HE DROVE TO AUSTRALIA!!! Tom has literally just got back from his trip to Australia. He drove down (through as many roads as he could) to Australia and played to any one and everyone along the way. He’s an inspiration and a lovely fella. He’s got a new album out soon, check out his latest single here.

The final night of this tour takes place in the Verve. This is the fourth time I’ve played here and I love it. Its booked through Mick at Double Denim Live, who is one of the good guys. It’s a tiny little venue in the city centre and is always a great atmosphere in there. Tickets are nearly sold out for this one as well. Supports for this night are Arms and Hearts (see above) and Iona Lane.

I put a post out a week ago asking for local supports in Leeds and was recommended Iona. She’s studying in the university I went to, but a far more interesting course. I was sent her latest EP, ‘Pockets’ and I loved it! I’m very excited to see Iona on this night, I’ll definitely learn a thing or two.

There you have it, all my supports for the tour in October. I can’t wait! Head over to my ‘Shows’ page to get your tickets now! I’ll see you there. 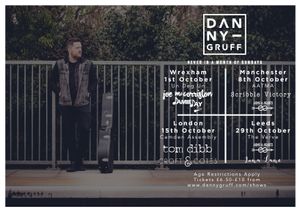